As part of a monthly tech lecture series, we will be starting with How Artificial Intelligence can help you today

This lecture will take place Wednesday, February 28, 2018 from 5 pm to 6 pm at the Bluffton Community Library

Launching a new series of technology lectures in 2018…

These live presentations with Q&A will take place at the Bluffton Community Library free of charge, open to all who wish to attend in person. They will be 1 hour in duration.

When and what topics?

Wednesday, February 28, 2018 at 5pm – How artificial intelligence can help you today

What tech topic would you like to hear about? Let us know.

Since moving to Bluffton, South Carolina a few months ago, I researched and visited a number of writers groups in the area, including the Island Writers’ Network (IWN) of Hilton Head Island and South Carolina Writers Association (SCWA). Attended a few their meetings and met a small number of non-fiction writers like myself. There are other groups I have not attended since I don’t live in Charleston like Rough Writers

Most writers I’ve met in the Lowcountry are fiction writers. This is not uncommon especially in the land Pat Conroy made famous among other authors.

A few other [unnamed] writers groups were more interested in upselling their membership dues instead of forming a local chapter to provide support and value to writers.

So I saw a gap in the market beyond myself where other non-fiction writers were underrepresented and underserved. After speaking with another local non-fiction writer named Roy Austin, we decided to start the Low Country Non-Fiction Writers (LCNFW) to meet monthly at the Beaufort County library which also supports and promotes our meetings to their own patrons.

All experience levels welcome. You don’t have to be published yet to join. We will have some networking among writers and share resources.

Our first meeting is scheduled on Tuesday January 16, 2018 from 6 pm to 7 pm at the Bluffton Community Library in Bluffton, SC. All are welcome and the meetings are free of charge.

We will meet monthly and future meetings will be announced shortly.

Click on the library poster below for our 1-hour schedule. 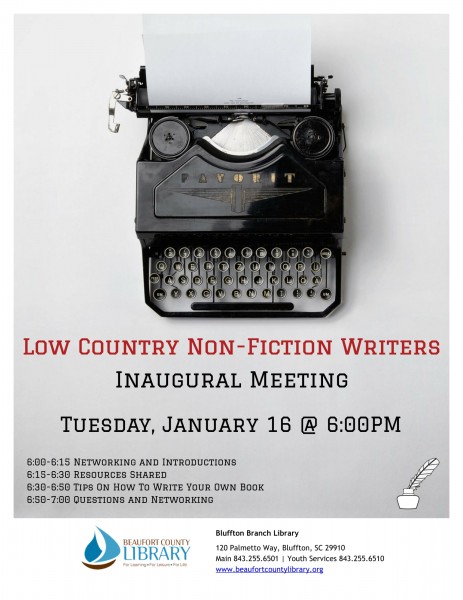 Special Thanks to the Bluffton Community Library for their support.